(Bloomberg) -- For decades, when the biggest names in corporate America went bust, they ran to one...
Read more

Seeking high returns, they poured savings into leveraged exchange-traded notes; the coronavirus downturn made some of...
Read more

BY JAMES "REV SHARK" DEPORRE Jun 1, 2020 1:33 PM EDT Quite a few market participants were surprised when the...
Read more

Seeking high returns, they poured savings into leveraged exchange-traded notes; the coronavirus downturn made some of them nearly worthless

When William Mark decided to get back into investing after the 2008 financial crisis, he looked past stocks and bonds. Needing to play catch-up with his retirement portfolio, the piping engineer decided to bet on a complicated product he hoped would deliver double-digit annual returns.

It worked so well—earning him 18% a year in dividends, on average—that he eventually poured $800,000 into the investments, called leveraged exchange-traded notes, or ETNs. When the coronavirus pandemic hit, he lost almost every penny.

The pandemic-fueled economic downturn has sparked turmoil in nearly every financial market. It has taken a particularly brutal toll on investors like Mr. Mark, who wagered on the roughly $7 trillion market for structured products: complex instruments that include ETNs, options-based strategies and certificates of deposits whose returns are tied to stocks or currencies.

Banks and brokerages advertised them as offering payouts both steadier and more lucrative than plain-vanilla investments such as bonds or index-tracking funds. Most professional money managers avoided them. For many less sophisticated retail buyers, the market blowup taught the kind of painful lesson that comes with just about every economic crisis: There is no such thing as an investment that is both safe and highly profitable.

The market’s collapse punished some banks that sold the products, which are considered derivatives. Société Générale SA, SCGLY 5.84% BNP Paribas SA and Natixis SA each lost more than $200 million on their structured-products businesses this year.

To understand how Mr. Mark and other investors were drawn to complex derivatives, it helps to go back to what happened after investment bank Lehman Brothers failed in 2008. Central banks cut interest rates to historic lows, which helped stabilize the financial system. It also lowered the income generated by the safest and most-stable investments, pushing investors into a risky hunt for bondlike products that could offer higher returns.

Mr. Mark bought a leveraged ETN issued by UBS Group AG UBS 1.45% that bet on companies that invest in the mortgage market, known as mortgage real-estate investment trusts. For others, the search for income led to investments in companies that bundled small business loans or oil pipeline rights, their payouts inflated by borrowed money. 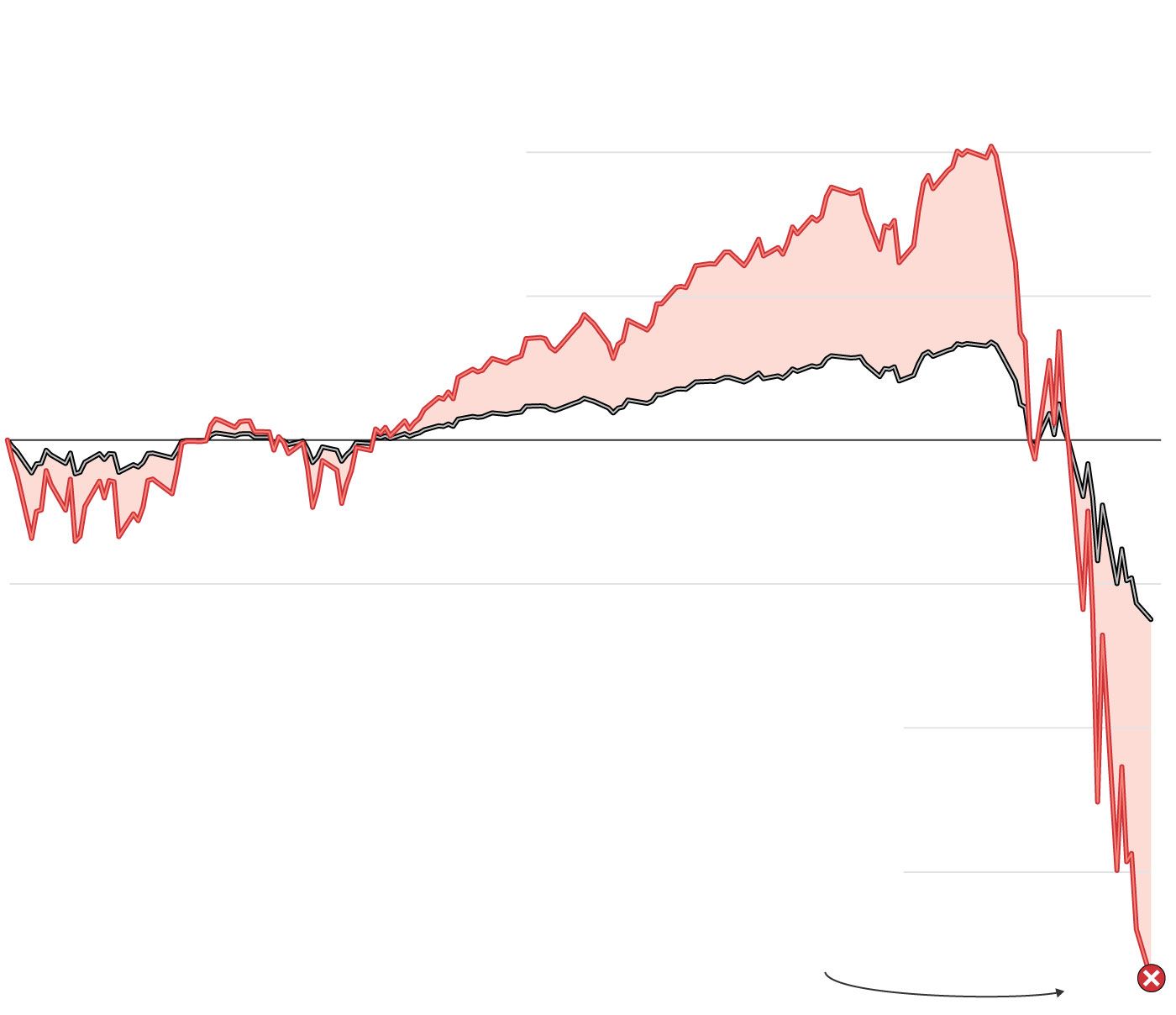 When a bank issues a typical ETN, the security tracks the value of an underlying asset, such as crude oil or the S&P 500. As markets move, the value of the ETN changes in tandem.

With a leveraged ETN,

with borrowed money to

returns. An ETN with

would triple any gains—

the underlying assets increase in value, and they can buy or sell the notes on an exchange.

If an ETN falls below a certain price, the bank has the option to redeem the note, often paying investors just a fraction of what they originally paid.

What all the products had in common was the potential to deliver robust returns at a time when economic growth was slow and a mountain of sovereign bonds around the world was offering investors no income at all.

Money manager ProShares made a name for itself focusing on riskier funds that would double or even triple the daily returns of conventional products, expanding its lineup from a handful of funds in 2006 to more than 130 ETFs today. Brokers working for Citigroup Inc., C 2.89% Morgan Stanley MS 1.60% & Co., UBS and Wells Fargo WFC 2.21% & Co. sold billions of dollars of risky exchange-traded funds, or ETFs, in 2008 and 2009.

Some traders said large asset managers, turned off by the complexity, mixed record and relatively high fees, hardly ever bought the products.

“If institutions aren’t buying this, the retail investor shouldn’t be either. Otherwise they’re the sucker at the poker table that doesn’t know it,” said Larry Swedroe, chief research officer at wealth-management firm Buckingham Wealth Partners. “If a product is so complex that you can’t explain it to your partner, then you shouldn’t buy it.”

In 2012, regulators sanctioned banks for failing to educate investors about the risks of leveraged ETFs. This year, Wells Fargo agreed to pay $35 million to settle claims that its financial advisers recommended inverse ETFs—funds that move in the opposite direction of what they track—that were too risky for retail clients.

This year, at least 15 ETNs managed by UBS have been taken off the market after tumbling in value. ETNs run by Citigroup and other firms have suffered significant losses. When troubled funds are taken off the market, investors typically are paid just a fraction of what they initially put in.

On the surface, ETNs don’t look much different than ordinary mutual or exchange-traded funds that track a group of companies. Both products allow investors to bet on the performance of anything from the U.S. stock market to the Swiss franc to wheat. But unlike ETFs, ETNs don’t own the assets they track. They are debt instruments. And the banks that issue them often have the option to take them off the market if their value falls below a certain level.

One reason ETNs have been hit hard in recent months as that many are leveraged, meaning they use borrowed money to amplify both gains, which also magnifies losses. Instead of rising 3% on a day that crude oil rises 3%, an oil ETN with three-times leverage aims to rise 9%. And instead of falling 3% on a down day, it would fall 9%.

It is “investing on steroids,” said Todd Rosenbluth, director of ETF and mutual-fund research at CFRA, an investment-research firm.

Should any complex and risky financial investments be off limits for individual investors? Join the conversation below.

Some products layered complex strategies on top of each other. James Zhu, a 78-year-old retired college professor and engineer, invested his and his wife’s life savings into ETNs based on payment streams from mortgage bonds, bundled together by investment firms and amped up with leverage.

So-called mortgage real-estate investment trusts, or mortgage REITs, return a significant portion of their profits to investors through dividends. When interest rates are low, mortgage REITs can look attractive to investors because they offer relatively high income.

By buying a leveraged ETN, Mr. Zhu was amplifying his bet on the mortgage market. Last year, shares of mortgage investment firms rallied. But this March, Mr. Zhu’s bet blew up.

“We’re too old to play those games,” Mr. Zhu said. “It’s too difficult for us. We were just looking for basic income.”

He is now suing his online brokerage, TD Ameritrade Inc., alleging the company made the ETN available to individual investors without providing sufficient disclosures. A representative for TD Ameritrade declined to comment.

Ultimately, the 33-year-old doesn’t fault Robinhood for allowing him to trade the products. “I knew they were risky,” he said.

Another concept that backfired: ETNs focused on the $122 billion market for loans to small and midsize firms through so-called business development companies, or BDCs. Like mortgage investment firms, BDCs tend to offer investors hefty dividends to qualify for tax benefits.

So far this year, shares of two of the largest such companies, FS KKR Capital Corp. and Ares Capital Corp., are down about 39% and 21%, respectively. BDCs managed by BlackRock Inc., Carlyle Group Inc., and Investcorp have fallen 45%, 33%, and 40% over the same period. The S&P 500 is down 5.8% by comparison.

Now, many worry that loan losses will mount as small and midsize businesses struggle during the downturn. A drop in the value of BDC holdings can increase its leverage level, possibly exceeding thresholds set with investors.

“If you see the carnage you’re seeing in the larger businesses, that is going to be a real problem for BDCs,” said Dave Lafferty, chief markets strategist at Natixis Investment Managers.

Some investors place little blame on Wall Street for their losses, saying they traded products they knew were akin to gambling at a casino—risky, difficult to time and even harder to profit from long-term.

The VelocityShares 3x Long Crude Oil ETN was issued by Citigroup. Its prospectus says ETNs “may not be suitable for investors who plan to hold them for a period other than one day,” and noted it is “possible that you will suffer significant losses in the ETNs even if the long-term performance of the applicable Index is positive.”

Investors who sold the VelocityShares crude oil ETN at the end of last year could have come out positive, because nearly all markets, including commodities, rose on prospects at the time for global growth. The pandemic sent crude prices down sharply to $14 a barrel, from $61 a barrel at the end of 2019. The losses were amplified for holders of the VelocityShares ETN. It last traded at around 16 cents a share, down from about $15 at the start of the year. In April, Citigroup pulled the ETN off of the market altogether, adding in a statement that it would no longer issue notes of that variety.

“I don’t think it’s a good investment tool for most people. It’s like a craps game,” said Randall Simpson, a 50-year-old project manager and environmental planner from Phoenix who has traded that ETN on and off for five years. Mr. Simpson said he has lost nearly 90% of his initial investment.

Years of investing, though, had taught him never to put a substantial portion of his portfolio into ETNs, so his losses have been manageable, if painful, he said.

Some investment professionals, including Messrs. Swedroe and Rosenbluth, contend that leveraged ETNs shouldn’t be as accessible as they are to individual investors.

Some firms, including Vanguard Group, have stopped handling client purchases of leveraged or inverse notes altogether. Other online platforms catering to amateur investors continue to allow them to dabble in complex products.

Some banks, meanwhile, are issuing new ETNs to replace those that crashed just months ago. UBS has announced five new ETNs that will mimic five recently redeemed notes which covered BDCs, commodities, and oil and gas pipelines.

(Bloomberg) -- For decades, when the biggest names in corporate America went bust, they ran to one...
Read more
notable

Seeking high returns, they poured savings into leveraged exchange-traded notes; the coronavirus downturn made some of them nearly worthless
Read more
notable

BY JAMES "REV SHARK" DEPORRE Jun 1, 2020 1:33 PM EDT Quite a few market participants were surprised when the markets didn't even dip this...
Read more
notable

(Bloomberg) -- For decades, when the biggest names in corporate America went bust, they ran to one of two courthouses for protection....
Read more

BY JAMES "REV SHARK" DEPORRE Jun 1, 2020 1:33 PM EDT Quite a few market participants were surprised when the markets didn't even dip this...
Read more

The New York gold market has been flipped on its head in just a couple of months, with a scramble for the...
Read more
- Advertisement -